Proposition 5: Hyper-partisanship is not just making things worse, it's leading inexorably to the collapse of the current system.

I acknowledge that worse is somewhat in the eye of the beholder, but let's use this chart of Congressional job approval ratings to make the argument. (This chart comes from Gallup, the polling company.)

Let's start our discussion in 1992. Through the Clinton presidency, Congress's approval ratings trended upwards. Notice the substantial spike after 1994, which was the election that brought us the Gingrich revolution and really began the era of deep partisan divide in Congress. I propose two reasons for that upward trend. One was the economic boom of the '90s--when people see improvements in their lives, they are more likely to see the government in favorable terms. But the other was in fact the partisanship that Gingrich brought with him, as highlighted, ultimately, by the Lewinsky scandal and Clinton's impeachment. Initially, and contrary to my thesis, people liked partisanship. What changed?

The boom ended, that's what. The boom itself was essentially extra-governmental. It arose via the first wave of efficiencies wrought by the Internet. Thus the partisanship of the '90s was essentially a sideshow. But then the boom ended, and we returned to a situation in which we needed a functioning government to make things better for people. And the government has increasingly failed to do so. You can see that failure in the trends of Congressional approval ratings since the end of the Clinton presidency.

Conflict is not a path to creation.

So if partisanship has not led to outcomes people like, is there any sign that the trend toward partisanship is abating? In fact, just the opposite is happening. Check out this graphic showing how the electoral results across America are getting more and more polarized: 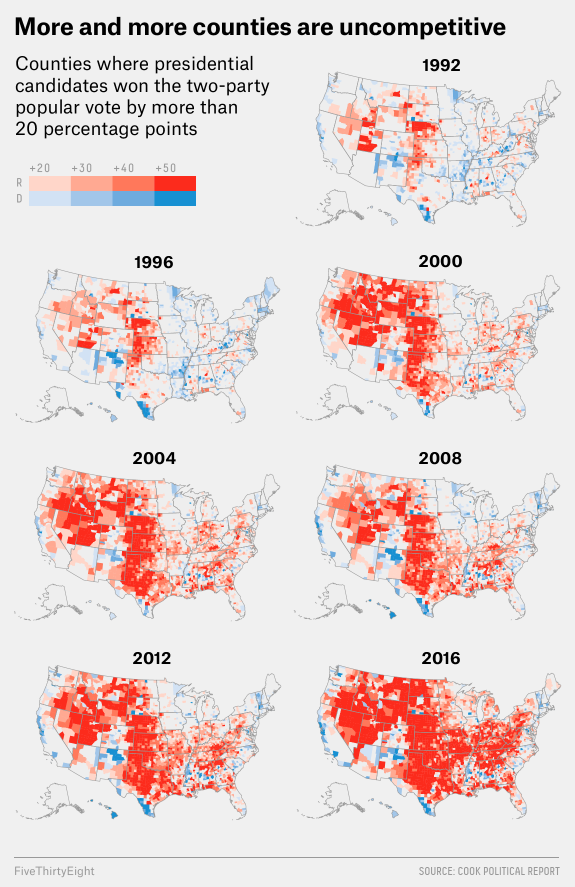 (For more discussion of this graphic and the underlying phenomenon, please see Purple America Has All But Disappeared on fivethirtyeight.com.)

There's a limit to how much a system can degrade before it collapses. Once a feedback loop gets set into place, it will grow and grow and grow until something comes along to arrest it. Do you see any evidence that anything is going to do that with respect to our system? Any at all?